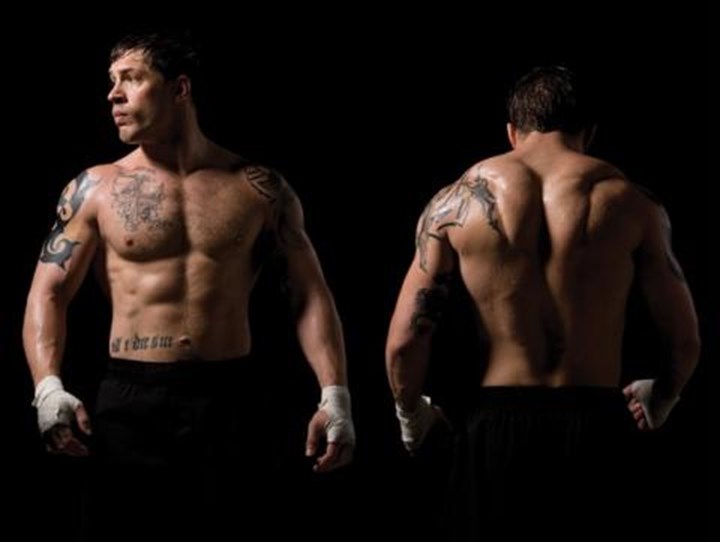 Since his breakout role in Bronson, Tom Hardy’s most iconic roles have been as much about brute strength as they have acting craft, and that doesn’t look to change with his latest. In the trailer for the new flick Venom, Hardy’s caveman musculature is matched only by his terrifying performance.

Whether it was building Bane’s monstrous physique or getting ring-ready with this Warrior workout, Hardy has entered every role in peak physical condition. Though he’s mostly concealed some kind of alien bug thing in Venom, he remains as much of a man mountain as ever. The rigours of chasing Leo through the forest in The Revenant, and Mad Max’s explosive car chases and endless stunts require a battle-hardened body, after all.

But the truly impressive thing about Hardy is his ability to maintain a blockbuster body while on shoots that trap him in the Namibian desert for 14-hour shooting days. Which leaves your excuses in the dust. If he can force in a workout while stranded in the African sands, you can do the same after a long day at work. To help, we asked PT Scott Baptie to provide the perfect workout that mimics the principles Hardy would have used on location.

Put together Baptie’s specially selected moves and complete the workout below whenever you’re pressed for time. Whether you’re away on location shooting the next Hollywood blockbuster, or just home late from the day job, these exercises will safeguard your gains against a busy schedule.

Stand with your feet shoulder width apart. Start the movement by bending your knees and sitting back with your hips. Go down as far as you can and quickly reverse the motion back to the starting position. Keep your head up and back straight throughout the move.

Set up with your weight supported on your toes and hands beneath your shoulders, body straight. Take care to keep your core locked so a straight line forms between your head, glutes and heels. Lower your body until your chest is an inch from the ground then explosively drive up by fully extending your arms.

Hold a sandbag in front of your thigh. Stand on one leg, the same side as the hand holding the sandbag, and as you push the other leg straight behind you, lean forward and touch the sandbag on the floor. Pause, then return to upright position. Repeat the sequence.

Grab the handles of the pull-up station with your palms facing away from you and your arms fully extended. Your hands should be around shoulder-width apart. Squeeze your shoulder blades together, exhale and drive your elbows towards your hips to bring your chin above the bar. Lower under control back to the start position.

Sprint at full speed for the designated distance.

A version of this article originally appeared on Men’s Health UK.

Must See: Greg Norman Is Absolutely Jacked At 62

Must See: Greg Norman Is Absolutely Jacked At 62

This Is Reportedly The Most Expensive Sports Contract In History

This Is Reportedly The Most Expensive Sports Contract In History

Melbourne’s Third Lockdown: What You Need To Know

Melbourne’s Third Lockdown: What You Need To Know

How to Instantly Boost Your Testosterone

How to Instantly Boost Your Testosterone