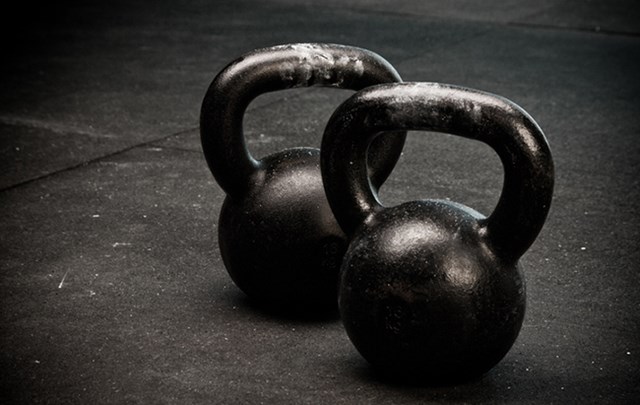 If you were forced to limit yourself to just one exercise, we could make a pretty ironclad case for the kettlebell swing.

A full-body move that in particular targets your all-important core and oft-neglected glutes, it also smelts kilojoules and forges new muscle fibres. What more could you want? Well, a resistance band, since you asked.

“A band will maximise the effectiveness of this move because it demands extra force from your glutes on the upswing,” explains PT Al Jackson. “Your core also has to work harder on the downswing due to the recoil.”

We think it’s a smart, inexpensive progression, especially if your kettlebell selection is limited. Try it as the last move in a mini-circuit:

30 seconds each of chin-ups, push-ups (band optional) and swings (band compulsory). Rest for 60 seconds and aim for 3-5 rounds in total. Then ring in the changes. “Just don’t start out too close to the mirror,” warns Jackson.

Loop the resistance band through the kettlebell, leaving enough space to grip the handle solidly. Secure it under your feet, then slightly widen your stance to add tension.

Hinge at your hips and push your glutes back to swing the kettlebell between your slightly bent legs; squeeze your glutes to thrust forward. Remember:
it’s a swing, not a squat.

At the top of the swing, double-check your core is engaged and brace yourself for the fall. Don’t eyeball the kettlebell: your head and shoulders will follow and your form will drop.

Maintain a neutral back – not rounded – as you swing the kettlebell back between your legs and bend at the hips. Start slowly with a light band. Then burn some rubber.

With Celebrities Stuck In Isolation, They’re Now Shaving Their Heads

With Celebrities Stuck In Isolation, They’re Now Shaving Their Heads

Scared She Might Be Clingy? These Pronouns Can Signal Red Flags

Scared She Might Be Clingy? These Pronouns Can Signal Red Flags

Centr Trainer Da Rulk Wants To Shake Up Your Training

Centr Trainer Da Rulk Wants To Shake Up Your Training