5 Of The Best Muscle-Building Tips From Dwayne Johnson 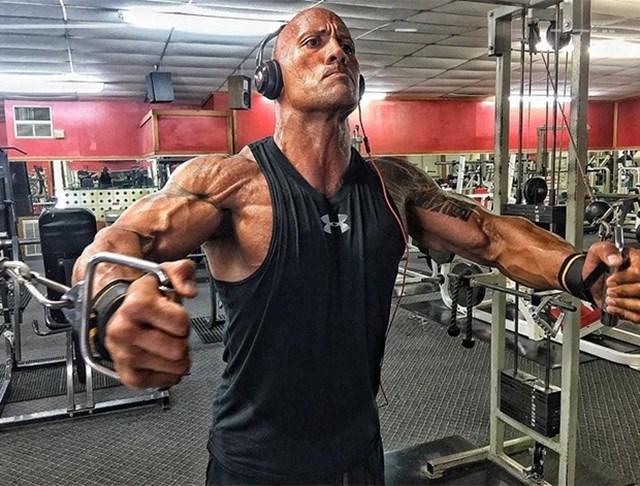 From the WWE ring to the jungles of Jumanji, Dwayne Johnson’s conquered everything he’s ever set eyes on. Now, he’s entering the superhero game. Set to star in not one, but TWO DC Comics films as little-known bad guy Black Adam, you can bet the People’s Champion’s charismatic smoulder will be present in full force.

So how do you get a physique to rival Superman’s? With Johnson’s help, of course. Read on for 5 essential tips from the Rock himself.

Dwayne “The Rock” Johnson has it all: unquestionable confidence, uncontestable charisma and an unbelievable physique. So, when The Most Electrifying Man in Sports Entertainment divulges his training secrets, you better know your role and shut your mouth.

He’s only going to tell you once…

If you’re not moving forwards you’re standing still, and if you want to pack on some serious muscle then you need to push your body to its limit. Never settle.

“I don’t train to maintain, I train to progress,” says Johnson.

The principle of progression dictates that to improve your fitness level, you must continually increase the physical demands placed on your body. A workout should never be easy. As soon as it is, that’s your cue to be a little crueler to yourself.

But don’t be a jabroni about it.

If your body isn’t conditioned, upping the weights too soon could lead to serious injury. And remember, progression isn’t just about how much you can lift. It can be accomplished in a number of others ways: add repetitions, alter your rep tempo, shorten or expand the rest period between sets or increase the volume of overall work.

Not sure how to steadily increase your bulk up programme? Work through a moderate number of reps (6-12) and sets (4) with a load that forces you to fail on rep six or seven. By the end of a six-week cycle you should be able to comfortably push out ten reps. At this point, increase your load so that you fail on rep six again.

Related: How Chris Hemsworth Built The Body Of a Hero

Yes, to anyone running around trying to catch Pokémon on their smartphone, a 40-year-old may be dead and buried, but as Johnson points out, your muscles are only just getting started.

“When you hit your late thirties, your muscles have great maturity and muscle memory, so you can make incredible gains.”

Turn that frown upside down, granddad. There’s life in the old dog yet. And at 44 years of age, The People’s Champ is living proof, as is the science.

A study published in the Journal of Strength and Conditioning Research, which compared people of different ages who followed the exact same programme for eight weeks, found that guys between 35 and 50 built just as much muscle as those aged between 18 and 22.

But before you go booking that Club 18-30 holiday to Aiya Napa, remember, while your muscles may still be fighting fit, your joints and bones are far more delicate and it will take you longer to recover after a heavy workout.

Focusing on functional fitness instead of never-ending arm and chest focused routines will help build muscle but puts the emphasis on mobility.

3. Listen to your body

It doesn’t matter how hard you train, if you ignore the warning signs your body is trying to tell you, you’ll never earn the gains you want.

Never has a truer word been spoken.

Pain is your body’s way of telling you to stop what you are doing. And despite what you might have heard, pain isn’t gain.

“Pushing through pain can result in more serious injury as the body is effectively telling you that it doesn’t like what is going on,” says musculoskeletal physiotherapist, Chirag Patel. “The likelihood is that if you ‘push through’, your body will try its upmost to compensate, causing further injury, prolonging your recovery and setting you back further.”

So what do you do when you experience pain? Simple. Stop. Don’t pass Go and head straight home.

“I turned them [cheat days] into Olympic events – pizza, brownies, pancakes, as much as I could eat. And I felt fine afterwards, by the way,” says Johnson.

Yep, even his cheat days are bigger than yours. And there’s a good reason for it, too.

Studies have shown that highly calorific meals boost the production of leptin – the satiety hormone that helps regulate energy balance by inhibiting hunger –raising your metabolism for 24 hours.

The occasional treat works wonders for morale, too.

Research has found that leptin also regulates the body’s dopamine system, which leads to a better mood and higher levels of motivation. And according to the Journal of the Academy of Nutrition and Dietetics, giving yourself an incentive or reward for a job well done can be an effective strategy to help stick to training plans.

Just don’t do it too often. Even The Rock knows his limitations.

“These days I approach cheat meals like I approach my tequila,” says Johnson. “I used to go bottle to lips but now I sip it. Well, every now and again I get the bottle to the lips. You’ve got to.”

Want our advice? Stick to the 80-20 system. Make sure 80% of your diet is based around healthy, nutritious foods, with the other 20% made up of foods you really look forward to eating.

5. Pedal to the metal

There’s going hard in the gym and there’s laying the smackdown. And for those with limited time available, it’s important to make every session count.

“Go hardcore, balls to the wall every time you work out,” says Johnson. “Leave it all in the gym.”

Johnson is right, of course, as always. You’re in the gym to train and to see improvements. Half-arsed efforts result in half-arsed gains. If you’re going to do it, do it properly.

Your workout lacking direction? Get your goals in order. Research published in the International Journal of Sport and Exercise Psychology found that you are more likely to commit and work harder if you have specific targets.

Having a long-term goal is fine, but make sure you set yourself stepping-stones along the way. For example, you may want to add 25kg to your squats in five weeks. Great. Now break it down further, by aiming to add 5kg to the barbell every seven days.

This article was originally published on MensHealth.co.uk

How Ronan Keating Went From Boy-Bander, To Man Of Style

How Ronan Keating Went From Boy-Bander, To Man Of Style

Here’s Why Some Men Are Taking Viagra Before A Workout

Here’s Why Some Men Are Taking Viagra Before A Workout

Why Every Man Should Be Lifting Weights Regularly

Why Every Man Should Be Lifting Weights Regularly

This Study Could Put An End To Your ‘Phoner Boner’

This Study Could Put An End To Your ‘Phoner Boner’