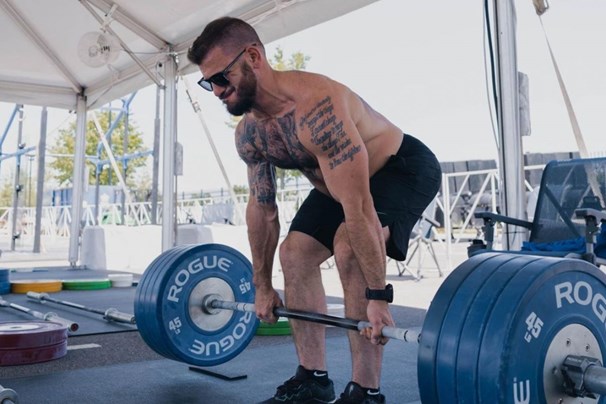 Mat Fraser didn’t just come to win a CrossFit Games, he dominated the sport. Since finding the sport of CrossFit following a serious injury which saw Fraser break his L5 vertebrae in two places from a heavy deadlift, he quickly ascended the ranks and a legend was born. He was crowned the Fittest Man on Earth five times and during his long and impressive reign in the sport, it was nearly impossible for another contender to even get a look in at the winning podium. It goes without saying then, that in order to sustain such an incredible performance in the sport, Fraser ensured he also fuelled himself like a champion.

In the latest episode of Fra5er, founder of Feeding the Frasers, Sammy Moniz, takes viewers through a typical day of the diet that five-time champion Fraser used to eat during competition. And need we say it, but it’s a lot of food. “It’s all very calorie-dense food, it’s a lot of carbs,” explains Fraser. “I have had a lot of this stuff in a while and it looks good.”

While Moniz and Fraser don’t quite give viewers the full breakdown of macronutrients and quantities, it’s still an interesting insight into just how much preparation goes into diet when you’re competing at the level Fraser once was. And given that his competitors never got a look in to such things, it does feel like the veil has been lifted somewhat on Fraser’s success as it’s clear that CrossFit Games champion left no stone unturned when it came to his performance – and that includes diet and recovery.

So, just what did Mat Fraser eat during his reign as CrossFit champion? At 8am he’d have breakfast, which consisted of a bowl of yoghurt with granola and berries, served with a strong coffee. “I hate eating real food for breakfast. I hate eating breakfast. Hate it, hate it, hate it,” explains Fraser. The yoghurt was an easy alternative and as he suggests, “It’s sweet, super easy and would get me primed up for my first training session.”

This meal was consumed before his first training session. Following that training, he’d consume the second meal of the day: a bowl of strawberries served with cream cheese on a bagel, scrambled eggs and bacon. “I hate feeling full first thing in the morning,” says Fraser. “I actually hate feeling full until it’s night-time.”

After the second cooked breakfast, Fraser would then embark on a second training session. For this, he’d typically snack on something smaller, like a Fuel for Fire smoothie which, if they were in peak Games training, would see him consume three. Other snacks include a ‘fun-sized’ Snickers bar, fruit, Gatorade, or two protein shakes of 50g whey protein per shake. “I would sip the protein during training and then [drink] the Gatorade after whatever the hardest piece was.”

The third meal of the day was a toasted sandwich with avocado and slices of chicken or turkey breast, served with a bowl of cut-up apples. This would see Fraser through to his next workout of the day, which was often a “Zone 2” cardio workout, involving hill sprints or another session in his home gym.

“You’d get home, then you’d sauna, shower and dinner was typically around 7pm, which was this giant plate of food,” says Moniz.

As Fraser explains, “I try to eat as few bites of food as I could until I was fully done training for the day. I would get home from my second training session and it was a full regular dinner – a steak, a vegetable and a starch. It was usually just a mountain of white rice.”

After dinner, Fraser would tend to consume Mini Wheats with whole milk – “more calories, get them packed in” – and then have something like a banana with peanut butter and jam. Despite going to bed at 10pm, he’d often get up in the middle of the night to make chicken tenders or eat a protein bar, as he admits, “I just have it in my head that I can’t go to sleep on an empty stomach. A full stomach helps me go to sleep.”

When competing at the CrossFit Games, the meals remained largely similar, but the pair explained that they would often shift the quantities, with protein decreasing and carbs increasing. Still, Fraser wanted to make as little changes as possible during the events, although he admits to upgrading to a full-sized Snickers bar. He also cut out dairy leading up to the CrossFit Games, saying, “It’s a highly inflammatory food and already you’re putting stress on your body, so let’s take one of those factors out.”