A few laps in this bullet on wheels and you’ll be producing more activation hormones than you know what to do with. 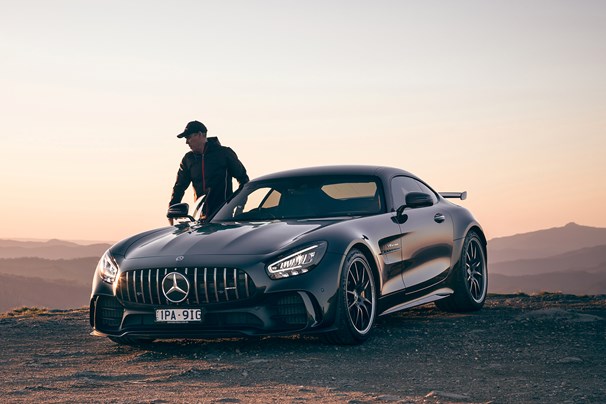 If you were to ask the average guy how he might give himself a little jolt of energy to start the day, he’d probably mumble something about a cold shower or a strong coffee. His answer is less likely to be: “Drive one of the world’s fastest street-legal cars so rapidly that you create an internal volcanic eruption of adrenaline that feels like it’s about to violently spurt from your ears”.

That’s a shame, because I tried it recently, and in terms of getting you moving in the morning it’s right up there with waking up next to a tiger.

My morning jolt was the Mercedes-AMG GT R, a sleek bullet on wheels that can deliver an experience akin to roughly 10,000 intravenous espressos.

Our early-morning start was at a Mercedes-Benz driving event held at Sydney’s famous Motorsport Park, and while there were plenty of other exciting elements to the track day – skid-panning in a car fitted with smooth, plastic wheels (“Like driving on Maccas trays,” says our instructor) and doing a vertigo-inducing reverse vertical climb in the GLS 400 SUV – nothing quite rinses out the adrenal glands like a quick spin in the gorgeous Mercedes-AMG GT R.

Fitted with a weight-saving carbon-fibre roof, a static rear aerofoil and sporty tyres designed to grip the tarmac like superglue, the GT R is built for speed – and looks it. Gunmetal grey, low to the ground and with curves designed to give the laws of physics a good, hard slap in the face, it’s the kind of car that begs you to test its limits – if only you were good enough to do so.

Tucked into the driver’s seat, I notice first off how cramped the GT R feels compared to a standard passenger car. This makes sense – the smaller the car, the greater its capacity for speed – but if you’ve got big, cumbersome, leg-of-ham feet like I do, having the brake and accelerator so close together can take some getting used to.

It may feel a little alien at first, but thankfully I have racing driver Chelsea Angelo as co-pilot to offer sage advice, including a gentle suggestion that I may enjoy the drive a little more if I were to stop strangling the steering wheel with the kind of raw tension you’d only find at an Oasis reunion.

Once I’m out on the track and giving the accelerator what for, there’s a rather loud exhaust pop that startles only slightly less than the unholy roar coming from the engine, which dishes out 430kW of raw power and 700Nm of spine-bending torque.

The problem with the GT R – if you can even call it a problem – is that it offers an incredibly smooth ride, even when you’re punching it well past 200km/h. Such ease
of driving at high speeds soon makes 100km/h feel like you’re crawling through a 40km/h school zone, which is fine when you’ve got a mostly empty race track to contend with, but not so great on standard roads that don’t feature the omnipresent aroma of burnt rubber.

It may have left my adrenals misfiring to the point where I kept waking up in a cold sweat for weeks afterwards, but the Mercedes-AMG GT R really does live up to its reputation as an unmatched, invigorating performance car. In the immortal words of one Ferris Bueller: It is so choice. If you have the means – and we’re talking a cool $373,400 here – I highly recommend picking one up.

Why This Hot New Hatch Will Get Your Heart Racing

Why This Hot New Hatch Will Get Your Heart Racing

Driving the all-new Hyundai i20 N. is thrilling - to the nth degree.