"The film is not only a social responsibility of film-making, but is also a moral imperative in the task of diverse stories, voices, and representation" 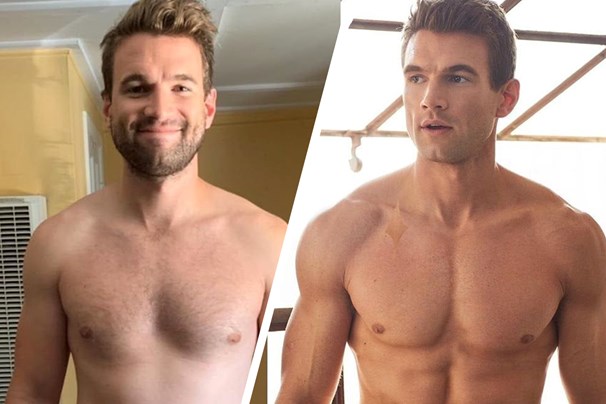 “Russell” and “Aussie actor” have gone hand in hand for the past few decades, however in the coming years, it will no longer only be “Crowe” that comes first of mind. That’s all thanks to the achievements and acting chops of Brisbane-born Alex Russell. If you haven’t heard of Aussie actor Alex Russell yet, it’s probably because the humble export is too busy working, on screen and in the gym, to be featured in many of the tabloids. But that could all be about to change as the star of hit series S.W.A.T continues to experience a rise in Hollywood. He’s a man in demand, with a leading man rig to match.

Russell’s latest project, Under My Skin, a dramatic independent feature starring four non-binary actors in its ensemble cast will have its Australian Premiere on 21 August on Stan. The story follows Denny, a free spirit and artist who falls for Ryan, a strait-laced lawyer. When Denny questions gender their love is tested.

The film marks the feature debut of Australian writer-director David O’Donnell, and is produced by Raynen O’Keefe and Russell himself.
“At this point in history, the casting of trans, gender-diverse and non-binary characters with people of lived experience, is not only a social responsibility of film-making, but is also a moral imperative in the task of uplifting trans and gender-diverse stories, voices, and representation,”
said O’Keefe, who identifies as trans and non-binary.
O’Keefe considers much of the strength of this film to be in the efforts that were made towards clarifying, supporting, and re-centering trans voices and experience – where possible – from within this narrative.
“When we move towards greater trans and gender-diverse authorship,” said Raynen, “we move towards authenticity, belonging, and a valuing of the differences, similarities and intricacies that make up trans experiences.”
“Much can be said for the communities and individuals from which these stories arise, and have always arisen,” Raynen continued. “When we consider the theoretical, social and embodied manifestations of what it takes to navigate such experiences within the world and current climate, we begin to acknowledge the great erasure, and over-sighting of what it means to bring such presence, grace and fearlessness into the living, loving and continuing knowing of each another, and also ourselves. ”
“The ensemble of actors playing Denny feels very intuitive to me and my understandings. These change points of actors are entirely redirections of internal compass for Denny. Simultaneously, the ensemble cast brings a multitude of perspectives to the experience of being non-binary.”
“This is a complex love story for our generation,” said O’Donnell, writer of Under My Skin. “Given we were making a film with a gender non-conforming lead, it felt like a natural choice to utilise a non-conforming narrative structure that would challenge an audience to question conventional (and often defunct) approaches.”

We caught up with Russell ahead of the Australian premiere of Under My Skin earlier this year to pick his brain on all things training, diet and his latest game-changing project.

Q: You’ve taken on a host of different roles, with TV and movies thrown in – how do you differentiate between the diverse range of characters you play? Do you ever take on any of their baggage? How do you disconnect from the stress they carry?

I think what’s important going into any role, no matter how different they might be from you, is how much of yourself you can being to the table. I’ve learned more and more to look within rather than outside myself when navigating a role.

In terms of baggage or stress from a role, i personally don’t feel i take any of that on. My challenge in life is navigating my own stress and baggage. Being able to bring conscious awareness to life where unconscious or subconscious baggage can get in the way. I heard a great quote from a famous psychiatrist recently (though I’m forgetting their name) it was something to do with good mental health being reliant on the ability to “experience what IS new AS new.” In other words, every moment in life is new… so don’t experience it as something old that you’ve carried with you. My characters and their baggage are honestly an escape for me.

Q:  Talk me through your training routine for S.W.A.T.?

Well my trainer, Paolo Mascitti – i call him the Wizard – will have me working out most days, 5 or 6 days a week. Some days we do compound movement superset with isolated movement. So i might do heavy bench press superset with pec flies or overhead press superset with lateral raise. Other days he’ll put me through high intensity workouts and by the end I look like i just got out of the pool. And we basically fill our weeks with a combo of these.

Q:  You mentioned on Instagram that whilst preparing for the role you ‘eat all the boring food’… what does that diet look like?

Some examples would be egg whites for breakfast with vegetables. Some broccoli, maybe some sweet potato. Chicken or some lean meat for lunch with cauliflower rice. Dinner could be steak and vegetables. Probably broccoli or green beans. Cauliflower is a real hit. There’s a helluva lot you can do with cauliflower!

Q:  Under My Skin is a really progressive project for Aussie cinema, what first attracted you to the role?

This movie is ultimately a very compelling love story that follows two people through extreme highs and lows and explores the power of love and the force it is for good and for change. I’d never seen a love story like this and that really intrigued me.

Q: What do you hope audiences take away from Under My Skin?

That we all should allow ourselves and others to honour our inner truths, whatever they may be, despite pressure from the outside world to fit into a box or mold that feels dishonest to us.

Q:  What was your biggest learning from working on Under My Skin?

Q:  What projects would you like to work on in the future?

I love basically every genre of film and television. To me, it’s all about the story and what i find compelling or exciting at the time. So… television, big movies, little movies. You name it, I’m down if i love the content.

I also love directing, producing, writing, putting projects together. I want to do more and more of that.

‘Under My Skin’ premieres on Stan this Saturday, August 21st.

Well, that’s one way to stop someone from eating.

He did it to set a good example to his daughter.

He put on 4kg of muscle.

The Aussie star of S.W.A.T and Under My Skin has certainly put in the hard yards. Here's how.