Hollywoods leading men weigh in on how often they shower. 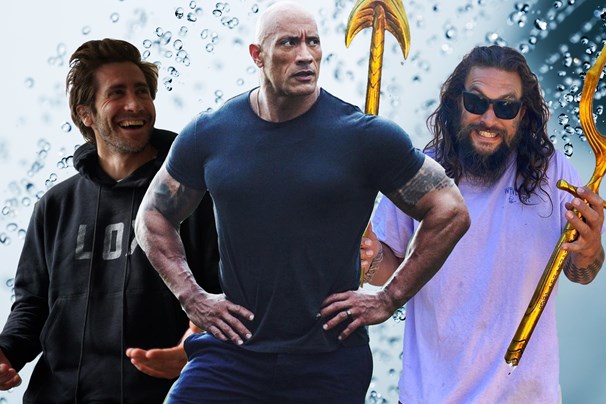 If you haven’t been following any celebrity news of late, we’d respect you for thinking that this headline is seriously dramatic. Like, how much really is there to talk about when it comes to showering? Well, apparently a lot, according to a bunch of celebs who have weighed in on the topic of ‘how much is too much?’.

To answer that question, we first have to explain how this all began – and we have none other to thank thank OG That ’70s Show duo Ashton Kutcher and Mila Kunis.

Basically, the married pair explained in an interview a few weeks ago, that they don’t wash their kids unless they can physically see dirt. “If you can see the dirt on them, clean them. Otherwise, there’s no point,” Ashton said on Dax Shepard and Monica Padman’s Armchair Expert podcast.

Dax, who agreed with Kutcher, added that you “should not be getting rid of the natural oil on your skin with a bar of soap every day” and should instead wash with water.

Once you catch a whiff, that’s biology’s way of letting you know you need to clean it up,” Dax’s wife Kristen Bell added on The View.

As the media began weighing in on the topic, so too did other celebs, like Jake Gyllenhaal, who told Vanity Fair, “More and more I find bathing to be less necessary, at times.”

“There’s a whole world of not bathing that is also really helpful for skin maintenance, and we naturally clean ourselves,” he added.

The came in the man himself, Dwayne “The Rock” Johnson, who weighed in on Twitter, writing, “I’m the opposite of a ‘not washing themselves’ celeb. Shower (cold) when I roll outta bed to get my day rollin’. Shower (warm) after my workout before work. Shower (hot) after I get home from work.”

Nope, I’m the opposite of a “not washing themselves” celeb.
Shower (cold) when I roll outta bed to get my day rollin’.
Shower (warm) after my workout before work.
Shower (hot) after I get home from work.
Face wash, body wash, exfoliate and I sing (off key) in the shower 🧼 🎶 https://t.co/iE6ZPhrthL

And now, Aquaman, the GOD OF THE SEA, Jason Momoa, has weighed in. “I’m not starting any trends. I shower, trust me,” Momoa told Access Hollywood.

“I’m Aquaman,” he added. “I’m in the fucking water. Don’t worry about it. I’m Hawaiian. We got saltwater on me. We good.”

So what’s the answer? How much should you actually be showering?

“Washing frequency varies between individuals, is bespoke and depends on environment and activity level. If it’s hot and humid, you sweat a great deal or are hitting the gym, you may wish to shower every day. Days individuals don’t sweat a lot, or those who live in cooler, drier climates, washing alternate days or every third day may suffice.”

Since The Rock is “working out vigorously several times a day”, she says, he may “feel the need to wash more frequently”. With that said, washing too often, too long or too aggressively can damage the skin barrier function and jeopardise its ability to prevent infections – “which ironically may be the reason for washing in the first instance.”

“The better-for-your-skin approach would be to stick to showering once a day, but I understand The Rock’s bathing regime is led by his busy workout schedule,” adds Dr Friedmann. “In this case, he’s right to keep the temperature cooler rather than too hot, which removes moisture from your skin – sometimes leaving your skin feeling raw and exposed.

7 Shower Mistakes That Are Ruining Your Skin, According To Dermatologists

“It’s also worth keeping showers short, and using a gentle non-soap cleanser for the face and body,” Dr Friedmann continues. “Avoid ordinary soaps and shower gels, as these remove the natural oils from the skin,” – opt for cream-based products instead – and “pat the skin dry after, rather than vigorously towelling off.”

It’s also interesting to add, that with many people still choosing to work from home or at least spend a significantly fewer number of days at the office, a lot of people are saying even a daily shower seems unnecessary. As Maria Cramer writes in The New York Times, “The pandemic has upended the use of zippered pants and changed many people’s eating and drinking habits. And there are now indications that it has caused some Americans to become more spartan when it comes to ablutions.”

In a recent YouGov survey, The Guardian reports that 17 per cent of people in Britain abandoned daily showers during the pandemic, with parents even going so far as to say their teenagers were quick to do the same. People are now questioning if they need to shower, as well as if they even want to and at a time where environmental disasters plague the media, many are seeing this as an opportunity to be more conscious about their water usage and environmental footprint.

Just in time for Movember.

Hair thinning? You need to read this.

Premature ageing due to the sun? We've got you sorted.

All you need is some length on top.

Replace all those bottles on your shower shelf with one of these.