Alcott now only needs to win Paralympic gold in Tokyo and the US Open later this year to complete the “golden slam.” 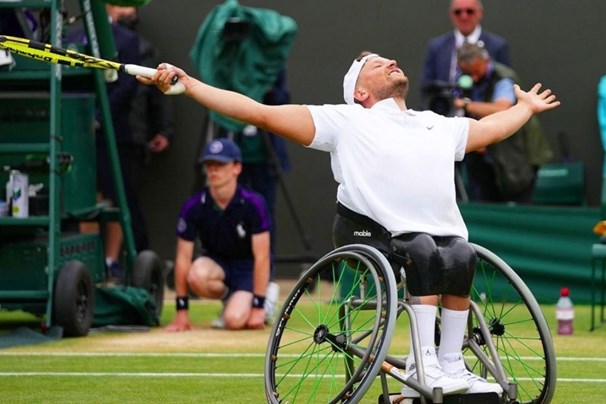 He’s the Aussie Golden Child and over the weekend, Alcott proved he’s also the dominant force on the tennis court as he stormed to a straights sets victory at Wimbledon, defeating Dutchman Sam Schroder. Known for his humour, passion and charisma, Alcott is ever the joy to watch on court as he is in interviews off it. But despite this being his second Wimbledon quad wheelchair singles championship, the victory is a significant one and could just lead to a golden slam year for the tennis star.

Despite sending down a double fault to start the match which was delayed by over an hour due to rain, Alcott managed to reclaim form, winning the first game. Despite facing a break point at 30-40 of his next service game, he fought off Schroder to hold serve and immediately broke serve thereafter, taking a 3-1 lead. He later broke again to make it 4-2 in a game that went to four deuces and closed out the set with a third break. The second set was more comfortable for Alcott, despite the Dutchman continuing to put up a fight. As the pair traded breaks of serve, the Australian ultimately broke again and held on for a 6-2, 6-2 win.

Having previously won Wimbledon in 2019, this year’s championship was a memorable occasion. It marked Alcott’s incredible 14th major singles championship as he continues to be ranked world number one. “I’m cooked! That was hard,” Alcott told the crowd on Court number 3 following his Wimbledon win. “If that went three sets, I’m in big trouble. But I just love Wimbledon, I get emotional thinking about it here. To me, it’s been a privilege…a dual Wimbledon champion!”

Even despite the travel restrictions that meant most of Alcott’s fans were forced to watch the game from home, the tennis star still had a loud crowd cheering him on for the final. “How’s the atmosphere, it’s unbelievable, I know the UK’s been through a time time, everybody has all around the world, to be able to have crowds back has been incredible,” he remarked.

Having already won the Australian and French Open titles this year, Alcott now only needs to win Paralympic gold in Tokyo and the US Open later this year to complete the “golden slam.”

Should such dreams become a reality, Alcott is pretty clear on how he’d intend on celebrating. “I’d have a thousand beers and be the happiest guy in the world if I did the golden slam – so I’ gonna try and do it but all I can do is give it my best,” said the tennis star.

Alcott added: “Mate, it’d be unbelievable – but it can be a dangerous game when you’re thinking too far ahead, so I try not to. I got burned once before doing that in 2019.”