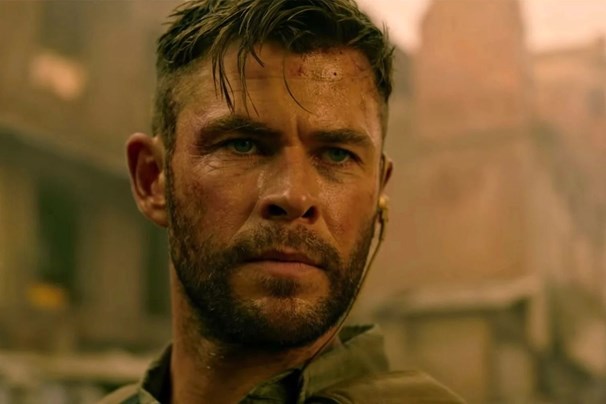 Netflix recently released a teaser trailer to the much-anticipated follow up to last year’s action thriller. New footage show’s Rake at the bottom of a river—the previous film ended with him falling from a bridge after being shot in the neck. In the trailer, Rake then opens his eyes as a soundbite from Ovi Mahajan, the kid he was tasked to rescue, plays over the images.

Hemsworth confirmed that he is indeed back for the sequel, which will once again be directed by Sam Hargrave.

The Extraction expansion might not stop with a sequel, either. According to writer Joe Russo, there are early plans for a new cinematic franchise—The Extraction Extended Universe—including a potential spin-off for Gaspar, the other haggard mercenary played by David Harbour.

It wouldn’t be a terribly surprising development: Extraction was a big hit for Netflix, and the Russo brothers (Joe and Anthony) had a big hand in shaping the Marvel Cinematic Universe, including directing Avengers: Endgame and Avengers: Infinity War. So with Extraction 2 already in the works, Joe Russo told fans that more may be on the way.

“I’m still not gonna commit because I think it’s more exciting to surprise people,” he said, speaking at a virtual CCXP panel, “but I will say this: we are working at building out a universe of films that could potentially explore some of the other characters from the first movie and some new characters, and see more historical interaction between the characters. So if you’re interested in David Harbour’s character, you just may get to see him in a future Extraction movie.”

That certainly leaves open a lot of possibilities. The original film hinted at a rich backstory for Hemsworth’s Tyler Rake, including his relationship with Harbour’s Gaspar. There’ve been hints that Chris Evans may join the sequel cast, and that Oscar Issac may come aboard as a villainous drug lord.

So far, everything’s been kept under pretty tight wraps.

When will Extraction 2 hit Netflix?

No announcement yet on release date, only a promise from the trailer that the film will be “coming soon.” What “soon” means for Netflix is anyone’s guess. Our guess: before the end of the year. Jesse Hicks is a Detroit-based writer and former features editor at The Verge who specialises in longform stories about science, health, and technology. He has written for Men’s Health, VICE, Harper’s, and many other publications.