Level-up. - by Jess Hunter, Fitness Coach at the Australian Institute of Fitness 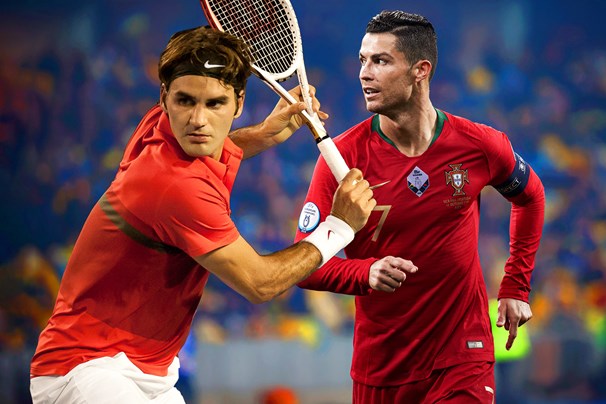 Cristiano Ronaldo, LeBron James, Roger Federer, Usain Bolt… these are undisputed legends of some of the world’s most popular sports. They have captured imaginations, inspired generations, and set new benchmarks for greatness in their respective fields. They also represent some of the best and most consistent elite athletes of the modern era, pushing their bodies for decades to stamp their marks as GOATs in the history books.

So, what can we learn from the greatest names in professional sports? And better yet, how can we apply learnings and insights from elite sports to level-up our own performance results?

Here are 7 key training modes and techniques commonly used in professional sports that may be worth incorporating into your workout program:

Anti-rotation movements, as the name suggests, look to reduce rotation through our trunk or core during movement. When we look at elite sprinters like Usain Bolt, Yohan Blake and Tyson Gay, they limit the rotation of their upper body to ensure a strong, rigid frame to push force back into the ground. We can train anti-rotation through movements like the Pallof press variations, where we anchor a band to a fixed position and – whilst standing side on – press that band forwards or overhead. You can easily replace the band with a pin-loaded cable machine if you’re looking for a higher weight. Adding either of these variations will ensure a strong, stiff trunk that will limit wasted energy, keeping you more efficient step after step.

There’s no doubt that hamstrings are a commonly injured area, especially for field-based athletes like footballers. To not only bulletproof your hammies, but improve your performance, isolated hamstring training should be an essential part of your program.

Using specific exercises to target either the proximal (top), distal (bottom) or both ends of your hamstring will ensure you cover all bases. We can do this through movements such as the glute hamstring raise and RDL for the proximal hamstring; Nordic curls and eccentric slides for the distal hamstring; and the razor curl for both ends.

Movements such as the Nordic curl and the glute Ham raise have become increasingly popular in recent years for their links to injury prevention, and it’s obvious why. A stronger hamstring from top to bottom is a healthier hamstring, and will help you handle sprinting at max speeds and rapid changes of direction with more ease and confidence.

Forward/backward, side-to-side and rotational movements are the foundation of tennis performance.

Knowing the best positions to be in to accelerate, decelerate, cut and crossover with correct mechanics can be the difference between returning a bomb serve or losing 13-11 in the fifth set of a Grand Slam. Just ask the Big 3: Federer, Nadal and Djokovic!

Knowing this, dedicating a section of your program to multi-directional speed movements like the shuffle, the crossover step, cutting and the drop step is highly recommended. By mastering these movements, you’ll be faster, more powerful and waste less energy during your workouts or an actual tennis match. Start by focusing on the correct posture first, the action of the legs second and arms third.

From Michael Jordan and Shaquille O’Neal, to Kobe Bryant and LeBron James, basketball is synonymous with high jumpers soaring through the air to throw down a dunk or to block a shot. It should come as no surprise that jump training exercises like plyometrics are a staple in basketball programs.

When done correctly, plyometrics can help you jump higher, run faster and reach new peaks of athleticism and performance.

If you’re looking to get a little more athletic in the gym or your program is feeling a little bit stale, VBT Training Zones could be the answer. Just as AFL athletes need strength, power and speed to perform at the highest level, training in the gym at different speeds can allow you to get stronger, faster and more powerful.

VBT provides clear guidelines by outlining the ideal weight (%1RM) to use and the ideal speed to move the bar to target 1 of 5 training zones that improve athletic performance.

If you’re looking to gain maximal strength, weights between 80-100% 1RM and bar speeds less than 0.5 metres per second are expected. For those looking to work on being more powerful, expect velocities 1 metre per second or greater with weights around 10-40% 1RM.

Triphasic training takes the three muscle actions (eccentric, isometric and concentric) and focuses a period of training, usually four weeks, around each. Each muscle action has a different role, whether it be to increase muscle growth and force absorption in the eccentric or down phase; to improve tendon health and strength at sticking points in the isometric or pause phase; or to improve strength and force production in the concentric or up phase.

Developed by US coach Cal Dietz, triphasic training is frequently applied to some of the NFL’s best players and teams to make huge gains in strength and power in the gym and on the field.

If you’re tired of countless hours doing road runs or on the treadmill, mix up your fitness with some MAS training.

The Maximum Aerobic Speed (MAS) training method tells us the lowest speed at which we consume our maximum amount of oxygen. Commonly used to identify the cardiovascular fitness of Rugby League and Union athletes, MAS can be used to build an entire season’s worth of conditioning and fitness drills.

As an example, a 5-minute run test that covers 1200m gives you an 100% MAS of four metres per second. The higher metres per second, the higher your aerobic conditioning. With this knowledge, training can be designed at or above 100% MAS to have you working harder, recovering quicker and performing longer.