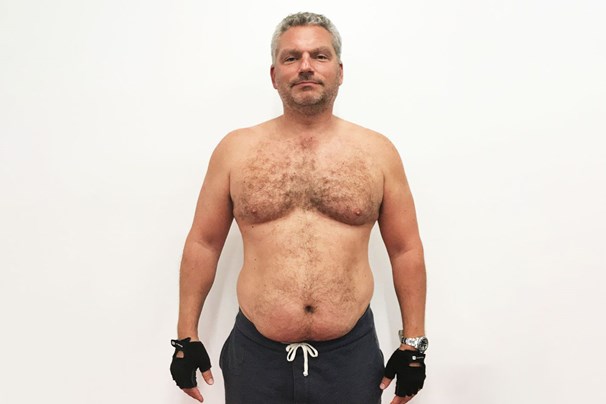 When Tamas Haiman was at his heaviest, he felt like he was living in someone else’s body. He’d get out of breath walking up hills—the same hills that he used to sprint up while wearing a 20-kilogram jacket. “I stopped weighing myself when I hit 104kg, but I think I peaked above that,” he says. “I was 45 years old.”

Haiman, now 46, who works as a banker in London, says that for many years, he was highly active—running marathons, cycling, regularly going to the gym—but eventually, his travel schedule started to get in the way.

“I stopped exercising altogether,” he says. “Things went downhill very fast. I really ballooned in six months.” Haiman, however, points to his diet—not necessarily the drop in activity—as the biggest contributor.

On the nutrition front, he started with the most obvious culprits: alcohol, processed carbs, and processed sugars. Immediately, he cut them all out.

“Then I focused on the macros for each meal rather than the total calories. I bought a scale to measure high-calorie items such as nuts, and tried to eat organic, non-processed foods as much as possible.” (Haiman recalls his housekeeper panicking when he arrived home with two massive bags of celery, kale, broccoli, spinach, and mentioning that it was for the next three days.) “Overall I ate more than before, but better,” he says.

As for his workout, he started with a combination of resistance and weight training, as well as a few strongman sessions at UP, while working with his trainer, Eddie. “Saying that he is an exceptional trainer is a huge understatement. I tried other people, but nobody compared in terms of focus, quality of the workouts, and the intensity.” Haiman kept busy on his rest days, too, working in the occasional hike, bike ride, or long walk. The biggest challenge, he says, was avoiding injury: “With the kind of weights we ended up working with, it’s really important to have someone watching and correcting your every move.”

That said, there were inevitable challenges: At some point, everyone plateaus, and Haiman was no different. “In the end there’s nothing to do but push through it and be patient,” he says. “You try to make small changes and see what works—such as increasing your daily steps, or cutting out certain types of food.” Once Haiman had his nutrition and fitness plan dialed in, the weight dropped quickly—between 2 and 3 pounds per week. After about 16 weeks, he says, he’d burned close to 60 pounds of fat.

As a result, Haiman says, he felt incredibly fit—having pushed through his personal bests on his squat, bench press, and nearly his 10K. “I never thought I would be able to do a farmers walk with almost 500 pounds,” he says. “My wife kept saying to her friends that she’d upgraded her husband.” Haiman now says he’s focusing on the cardio side of things—he’d like to finally crack that 10K PR, for starters, as well as in the half-marathon. More importantly, he wants to prove to himself that he can keep his weight stable, and possibly even improve a bit: “I’m keen to get my bodyfat down to 10 percent, which I came close to doing twice, but life got in the way both times and I had to cut the transformation short.”

For people who aren’t, say, just a few gym sessions away from 10 percent body fat, Haiman says the important thing is to get started right away—a short run, a light workout, whatever it takes. “The earlier you start, the less you have to make up for.” Staying active builds up a calorie deficit, naturally, which is the primary key to weight loss. Finally, he advises people to get a good night’s rest. “The one thing people overlook is sleep,” he says. “You’ll need more than usual after a training day, so try to allocate for that.”

This article was originally published on menshealth.com.

Mike Darling is an executive editor at Men’s Health where he assigns and edits coverage around the brand’s core subject areas, including fitness, style and grooming, sex and relationships, and technology and gear. He was previously a senior editor on the magazine, and also spent two years as the managing editor of Vice Media’s health vertical.