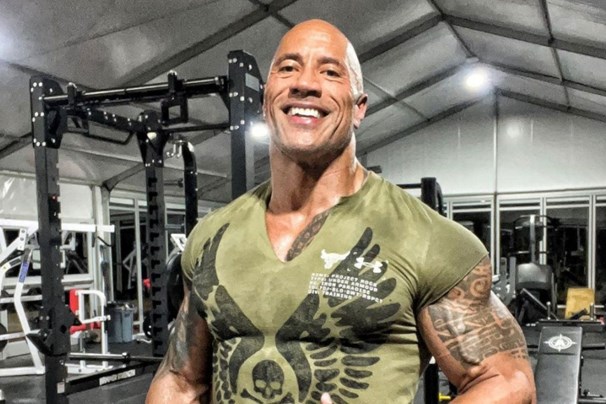 Dwayne ‘The Rock’ Johnson is seemingly everywhere. From Instagram to the screen to huge billboards, the star can’t be confined to one medium alone. This is an actor who is in high demand, someone production companies know will continue to draw a crowd, regardless of the movie on offer. It’s hardly surprising then, that in 2020 Johnson sat at the top of the Forbes list for highest paid actors. Film like Red Notice saw him pocket a staggering $23.5 million, while countless other lucrative endorsements from fitness brands saw him close out the year with a $122 million pay check. It’s hard to believe then, that there was a time where The Rock wasn’t the Golden Boy Hollywood knows of now. In fact, in a recent interview, the actor revealed that he felt insecure and uncomfortable in his own skin, and was even told to lose weight if he wanted to become a leading actor.

In a YouTube interview with Vanity Fair, Johnson gets candid about his first foray into the world of acting. While he answers some lighthearted questions in the beginning, the interview gets increasingly more personal as the camera nears his face. But Johnson, known for never shying away from the truth and being vulnerable when he needs to be, instead uses the opportunity to impart some words of wisdom for his fans. When asked what it means to be a man, Johnson reflects: “I think what it means to be a man is to be accountable, is to be accountable and stand up to the mistakes you’ve made. It’s okay to f**k up, it happens to all of us. And be open, rip yourself open, be vulnerable. I’ve all – I’ve been there, we’ve all been there.”

Johnson adds, “You know, the benefit of doing something like that, is on the other side of that, usually is some sort of progress, and how important that is.” He continues, “It’s also, in my opinion, a quality of being a man is doing what you say you’re gonna do. And taking matters into your own hands sometimes. But if you look somebody in the eye, you shake their hand, you give them a hug or you give them your word, it’s important to do it, or do your best to see it through.”

The interviewer then asks the Hollywood star when he felt the least comfortable in his own skin. For those of us watching, it’s a question we’d be quick to meet with an eye-roll. This is, after all, The Rock – a man known for being perpetually in superhero-like state, with a gym-honed physique that is testament to his unwavering drive and work ethic. It’s surprising to hear that Johnson actually had two occasions where he felt uncomfortable in his skin.

“When I first started as a professional wrestler, I was told back then that you can’t smile enough, you’ve got to be happy every time you go out there, you have to be so joyous at the opportunity that you have. I wasn’t reacting authentically and I was being a very buttoned-down, saccharine version of who I actually was at that time in the world of professional wrestling,” Johnson revealed.

As for the other time, Johnson reflects that when he first transitioned to film in the mid-2000s, the beginning of his movie career was marked with criticism as he was told to lose weight, change his eating habits, ditch the gym, and quit referencing the name ‘The Rock’. “Well, you buy into that shit, as I did, until – one of two things was going to happen,” he said. “You’re either going to continue to go down that road and that path, and you’re going to be miserable. And eventually your career is probably going to fizzle out and it’s not going to have any sense of longevity or quality to it. Or, the other thing that’s going to happen, you’re going to say ‘f**k this shit, I’m gonna be me, and we’re going to see what happens.’ And I think in that authenticity moment, that moment of clarity, a funny thing happened in the world of professional wrestling and a funny thing happened in the world of Hollywood, both industries conformed to my authenticity and allowed me to be me, and that’s when things changed.”