Featuring a custom Rogue rig, assault bikes, portable squat racks, recovery tools and one machine Fraser admits will be in every home gym he ever builds from here on out. 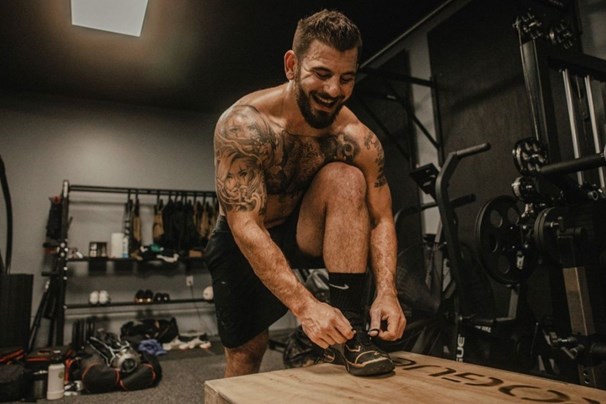 As a man that came to dominate the world of CrossFit and the phenomenon known as CrossFit Games, it’s safe to say that you’d expect Mat Fraser to have a rather impressive space when it comes to his home gym. This is, after all, a man who spent most of his waking hours training relentlessly, day in and day out, with the singular focus of becoming the best in the world at his chosen profession. Fraser may have retired from competition, but he isn’t sitting idle and the latest tour of his home gym proves just that.

Fraser first gave fans a glimpse into his gym when he shared a video to his YouTube channel showing the various gear in his garage gym. Posted shortly after retirement, Fraser has since moved into a new house that has allowed for more room dedicated to a training spot. And, having converted the space to his dream gym, Fraser is now taking fans on a tour of the setup, with an assist from Rogue Fitness when it comes to the equipment stored inside.

“It took awhile to set up this space,” says Fraser. “Any time I’ve moved into another home gym it was like, a day or two to set up, kind of get stuff moved in, you’ve got a couple sets of weights…this gym was a little more elaborate.”

Fraser had a custom rig built to fit the room, one he explains took multiple days to build out and set up. When it comes to cardio machines, there are plenty here. “I basically wanted two of everything so that if I have friends coming over or if Sammy [his wife] are working out together, we don’t have to coordinate who’s on what machine when,” he explains. As a result, you’ll find pairs of machines like Concept2 SkiErgs, Concept2 rowers, Concept2 BikeErgs, Rogue Echo Bikes – which, Fraser also admits, are his preferred method of fan bikes for calories – and Assault Bikes.

It’s the weight section that is truly impressive though, with a Rogue barbell holder “overflowing” with barbells. There’s standard Rogue Ohio bars, competition bars, and an EX curl bar. Then, Fraser shows off the beginning of his massive rig. “I didn’t really want the typical wall-mounted rig just for pull-ups and squats,” he says. “I wanted each station to kind of be a tool to serve a purpose.” There’s portable squat racks his wife can move, and a wall-mounted pull-up bar too.

Explaining the rig’s specs, it’s clear that this isn’t the kind of equipment you’d find in just any CrossFit gym. Fraser admits that when he submitted his product order to Rogue, it was so massive that someone at the company wrote back asking just what he was trying to do. When Fraser then explained his plans, the rep came back with a different option. “They were like no, you’re not installing that – we’re going to design something custom and it’s going to look sharp.”

Fraser’s weight plates are mounted to the wall and he uses the same lifting platforming as his old gym. He’s particularly fond of the stall bars, with the stacked wood slats proving versatile enough that Fraser can use them for everything from resistance band mounts to strict hanging exercises like toes-to-bar and L-sits.

And as any athlete knows, recovery is key to performance and corner shelves hold all of Fraser’s recovery tools, as well as speakers and towels. He keeps kettlebells on the floor under the shelving, with weights going up to 203 pounds. “Those used to get brought out once a year, just before the Games to get my hands on them,” he says. “I don’t know if they’ll ever get brought out again.”

If all of this has you feeling some kind of gym envy, it’s not all bad news. Fraser was quick to point out one section he loves that anyone can get from Rogue, called the Cave. It has pulleys for cable work up high and on the ground, along with a squat rack and pull up bar. Fraser wanted it so he could have a space for traditional CrossFit work, as well as the “Globo gym stuff”: lat pulldowns, seated rows, and cable work.

There’s a Speed Bag machine, Iron Neck, grip pinchers and specialised pushup station, but one tool Fraser says will be in every home gym he ever builds is a reverse hyper machine. And, let’s not forget the Stairmaster, a machine Fraser explains he wishes he’d discovered “sooner in my career.” Fraser says he first used the machine during a rare week off during his competition days and fell in love with its low-impact training. He now uses it a few times a week for 20 to 40 minutes wearing a weight vest.

Check out the video and prepare for some serious gym-envy below.