In the highly anticipated film, Golding sheds his rom-com past for that of a chiselled, enigmatic action star. 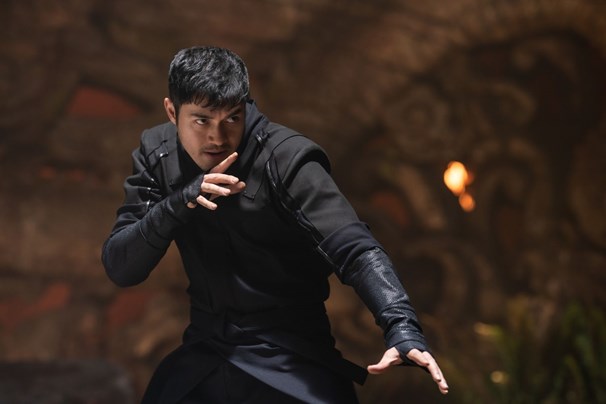 If you didn’t know of Henry Golding before 2018, after the release of Crazy Rich Asians you were suddenly unable to escape him. With his enviable looks and buoyant charisma, the star’s face lit up every billboard and poster available, that warm, main-character-energy-smile practically radiating from the buses upon which it was adorned. Alongside his co-stars, Golding suddenly found himself thrust into a rare stratosphere of fame, previously only reserved for such heavy-hitters like Brad Pitt and Leonardo DiCaprio These were the men you knew by last name only. But after Crazy Rich Asians made $237 million worldwide and became the highest-grossing romantic comedy of the past decade, Golding took his place amongst Hollywood’s leading men calmly.

You’d have expected then, that the star would stick to that which made him so famous: the rom-com. But Golding isn’t one to play it safe, and in his latest project he’s going bigger and bolder than ever before, taking on the titular character in Snake Eyes: G.I. Joe Origins. If the name sounds familiar, it should. In the mythology of G.I. Joe, Snake Eyes and Storm Shadow not only train and fight together, but establish something of a brother-like bond. But as anyone who has read the comics will know, this soon turns into a bitter rival.

Taking place in a world where the famous groups of G.I. Joe and Cobra exist, the film focuses on the origin story of the man we know as Snake Eyes. After the murder of his father, Golding’s character is on a quest for retribution and after saving the life of Tommy (aka Storm Shadow), the two form a bond and travel back to Japan to train with Tommy’s family, the legendary clan known as the Arashikage. It’s only when Snake Eyes discovers this sense of family that he develops a code of honour, transitioning from a mislead youth to the Snake Eyes audiences know and love.

Partially shot on location in Japan with a predominantly Asian cast, the film is directed by Robert Schwentke from a screenplay by Evan Spiliotopoulos, Joe Shrapnel and Anna Waterhouse. Just like you would expect of a blockbuster action flick, the fight sequences are gripping, with flourishes from Golding that are so incredible to witness it’s hard to believe that this is an actor, not someone who has been trained in the art of swordplay for his whole life. Not surpassingly, the actor trained intensely, putting in two months of training before production even began as he immersed himself in the intricate stunt work necessary to embody a sword-wielding warrior trained by Japanese ninjas.

Ahead of the release of Snake Eyes: G.I. Joe Origins in theatres on July 22, we caught up with Golding via Zoom to hear more about the training that went into the role, the origin story of Snake Eyes and why the opportunity to play an action hero after his rom-com past might just prove to be the role of a lifetime.

Men’s Health: How familiar were you with the comic and what drew you to the role of Snake Eyes?

Henry Golding: I wasn’t the diehard fan as there are out there. Just because, growing up outside of America it was tough to get hold of the comics and cartoons, and the figurines and you know, the toys and things. I was always sort of on the outskirts looking in but was always familiar of course with certain characters, one being Snake Eyes being the most badass. Everyone wanted to be him on the playground. So for me, when hearing that Paramount were interested in having me meet with Robert Schwentke the director, I jumped at the chance.

I really wanted to understand what he was going to bring to the story that hadn’t been told already, in the manner that they have been told and he really didn’t want to make a generic sort of superhero movie. He wanted to make something with substance and substance came from the background story of Snake Eyes, and his struggles as a man before the mask. That really struck a nerve with me and I was all aboard.

There’s a lot of mystery surrounding Snake Eyes and even in the comic Silent Interlude, there are no words. I think of a character like The Joker where immediately you know the famous laugh, and this is such a contrast. For you as an actor, does that present a challenge or is it more liberating to have the freedom to play around?

No, I think that you can say very little but mean so much. Snake Eyes himself as a character in this movie only speaks when absolutely necessary. He’s not one to chat someone’s ear off or tell them of their impending doom or what not. He’s very calculative and straight to the point and very, I suppose, tactful in what kind of information he imparts. Especially in the situations that we find him in this first movie, he wears many proverbial masks. So for me as an actor it was about finding that sort of balance between not finding him too involved and too open, because he is a mysterious character and that’s why a lot of people are so drawn to him.

Of course, so much of it is about him being this ninja warrior. Could you talk Men’s Health through the training you had to do for the role. I know you shared images on Instagram of you training with a sword, too.

It was a tremendous amount of swordplay and we did a lot of hand-to-hand combat. But majority of your training really is in the choreography. It’s about being able to smoothly transition from foe to foe, whilst making it look really cool and believable so you would just crack on with four or five pieces of choreography in the day and just repeat them, just drill them until you were sore, and drill them until they were stuck in your head. And that’s what we had to do.

Is there anything there that you’ve taken away and perhaps introduced to your own training since the end of filming?

It was more about staying low in a very sadistic horse stance for hours on end, just because that’s the sort of stance for sword fighting. So, being 6 foot, the lower the better. So at the beginning, it was really difficult to get to that, but by the end of it, it just felt really natural. So it’s about fluidity of movement and I think it becomes muscle memory. To be honest, hopefully I’ve still got it. We’ll have to see.

What do you hope audiences take away from the film?

I think excitement about a brand new launching of a G.I. Joe universe. I think this take is something fans have been yearning for and I think it’s going to bring the G.I. Joe to a whole new fan base around the world because of the action, because of the storytelling, because of the characters. I’m excited for people just to be going to the movies again.