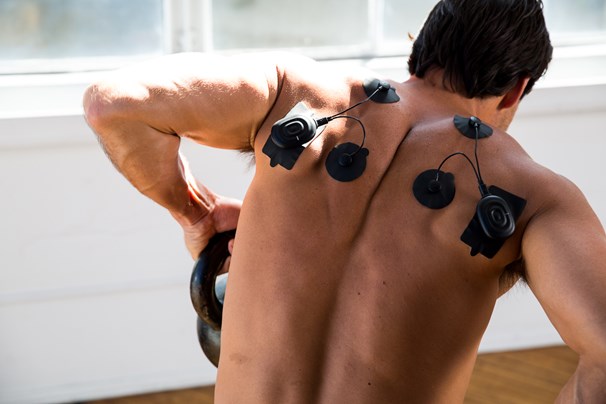 When it comes to the Men’s Health office chat, one topic is always on noticeboard: recovery. And fair play: Not only does trying to sit down on the couch after leg day seem like the most difficult task in the world, but the fact that allowing your body time to rest and restore can help grow your muscles is pretty damn impressive… and worth talking about.

So in our endeavour to check out all the coolest new toys that promise to fight post-exercise muscle soreness and get back into gym- or run- or spin-ready shape as soon as possible, we came across the newest release from health tech leaders Therabody, who have acquired the world’s first Smart Muscle Stimulator™ PowerDot.

It looks a bit like a TENS machine with a collection of pads that you’re meant to stick on the areas you want to focus on – if you’ve ever visited a chiropractor or physical therapist, might have heard about this type of treatment before.

The product comes in two options, the PowerDot Uno (RRP $289) which comes in the form of a sleek lightweight device that can be controlled via bluetooth through the PowerDot app, and the PowerDot Duo (RRP $499), a levelled-up option which offers two devices allowing you to uses PowerDot’s signature electro-stimulation on pivotal areas such as the lower back, traps and abs.

How does it work?

To not get too complex, the PowerDot uses electrical stimulation that physically moves targeted muscles, causing them to contract and release to increase blood flow to help improve muscular strength and endurance, recover faster, help prevent injury, and temporarily reduce and manage pain.

Through these forced muscle contractions, the PowerDot is supposed to promote increased blood flow in its targeted area and help soothe any inflammation.

All you have to do its push ‘”play” on the app and the device does its thing.

Is it worth the cash?

To give you some background – I’m 26, but if you’ve heard me complain about my muscle and joint aches, you’d probably think I was 80. While I have no injuries, and I’m probably making a mountain out of a molehill, I would still categories myself as someone who goes pretty hard at the gym, with a few all-out boxing sessions thrown in the mix too, so I’d say my complaining is warranted.

After a week off training, I thought a hard session back would be the perfect op to put the PowerDot 2.0 to the test.

Setting it up is pretty simple, you just open up the app and pick the type of treatment you want (relief, recover etc) and place the electrode pads on your body according to the app’s diagrams.

Then the fun begins.

With each burst, I could feel my muscles contract as the electric pulse passed through them. Personally, I actually found it quite soothing (once you’ve been in labor not much fazes you), but when my husband have it a go he was a lot more dramatic. What we both found was that after a while you kind of get used to it, and there’s just enough push that you feel like something is happening, but not so much that you’re in a bunch of pain.

We tried the PowerDot after a few sessions, and what we both found was it absolutely cut down muscle soreness and fatigue – meaning we felt like we needed less downtime in between gym visits.

What I also personally noticed was (I don’t know if it was just in my head but the device claims otherwise) I could absolutely harder in my sessions after using the device a few times. My husband also said that it really helped with his back pain from standing all day at work.

If you’re not really an active person this might not be worth the cash for you, but if you are a generally active person – or someone who deals with day-to-day pain, it’s well worth the money. Especially if you’re not keen on regular visits to a physio. MH approved.