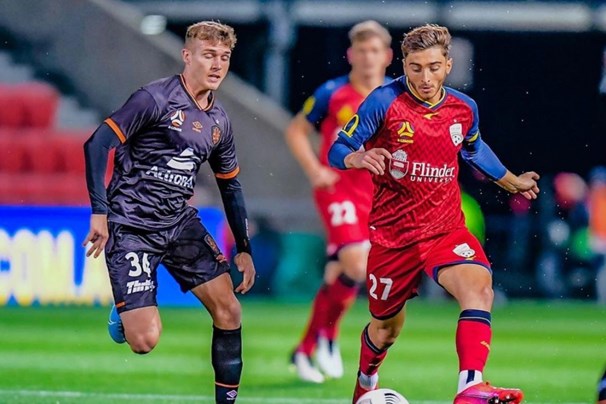 Adelaide footballer Josh Cavallo was always known for his athletic prowess and skills on the field, but in recent weeks the star athlete has become something of a face for the sport’s future – one focused on inclusivity and acceptance – after becoming the only openly gay top-flight men’s footballer. Since making the announcement via social media, many footballers and fans alike have been quick to praise Cavallo for his courage and bravery, heralding it as a landmark moment for the sport and what will hopefully be the end of toxic masculinity that often pervades men’s professional sport. It comes as sad news then, that Cavallo expressed fear at competing at the Qatar World Cup due to the emirate’s harsh ban on homosexuality and legal penalties that range from flogging to lengthy prison terms and even execution.

For years, Cavallo had tried to hide his sexual identity from everyone he knew. “I didn’t just hide it from my teammates, I hid it from my family. I hid it from my friends, I hid it from everyone I hang around so it was only when I was by myself that I could genuinely relax and not worry and not stress,” he said. But while the women’s game has seen a significant increase in LGBTQI+ representation, with more than 40 lesbian or bisexual players taking part in the women’s 2019 World Cup in France, only a handful of male players have ever come out.

In a recent interview with the Guardian for the publication’s Today in Focus podcast, the star player revealed that he would be afraid for his safety should he be asked to participate in the 2022 Qatar World Cup. “I read something along the lines of that [they] give the death penalty for gay people in Qatar, so it’s something I’m very scared [of] and wouldn’t really want to go to Qatar for that,” he expressed.

“And that saddens me. At the end of the day the World Cup is in Qatar and one of the greatest achievements as a professional footballer is to play for your country, and to know that this is in a country that doesn’t support gay people and puts us at risk of our own life, that does scare me and makes me reevaluate – is my life more important than doing something really good in my career?”

Under several Qatari laws, homosexual acts are banned and penalties that exist range from a year in prison to a decade. According to a 2019 guide for LGBTQI+ travellers, Qatar was rated as the second most dangerous place to travel for queer people as muslims in the country can be subjected to Sharia law that bans any sexual activity outside of marriage. These punishments can even include the death penalty, with homosexual acts often resulting in execution despite several human rights reports suggesting there is no evidence any gay people have been executed for the offence.

Cavallo’s comments come after increasing pressure mounted on Fifa for awarding World Cups to countries like Qatar and Russia, where homophobia has been called a “state-sponsored” project. As critics have expressed, these choices do little to inspire inclusivity and acceptance that lies at the heart of football.

For Cavallo though, he continues to be a leader in the game and admits that since coming out, several other professional footballers who are still in the closet have reached out, seeking his advice. “There are people who have reached out to me in confidentiality and said: ‘I’m struggling with the same thing Josh,’ and they’re professional footballers too. And look, it’s something you can’t rush. [I say] you want to be yourself, and at the end of the day I wasn’t happy and now look at me, I’m honestly on top of the world,” he said.

“They like the sound of that and they say: ‘Josh, I haven’t experienced that before and I want to,’ and I say: ‘It’s in your hands, it’s your journey and there’s a light at the end of the tunnel.’ I didn’t think there was but there definitely is.”