Does it Matter How Fast You Lift? | Men's Health Magazine Australia

Does it Matter How Fast You Lift? 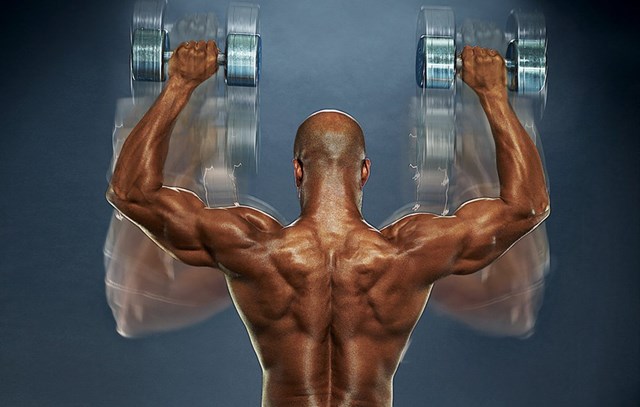 In life, each of us tends to move at our own pace. Some of us walk, talk, and eat faster or slower than others.

Research tells us that different speeds come with different costs and benefits. Walking faster, for example, burns more calories than walking slowly. Those who talk faster are more persuasive. And those who eat fast tend to eat more.

So someone struggling to lose weight might be advised to eat slower and walk faster, and to beware of fast-talking salesmen trying to push the latest supplement miracle.

Related: 32 Exercises That Will Make Your Arms Bigger

It’s no surprise that in the gym, we also lift at different speeds. The open question is how much difference it makes.

Dr Brad Schoenfeld tackled that question in a 2015 study in Sports Medicine. And the answer is . . . not entirely definitive.

“Within a fairly liberal range, I don’t think it makes much difference how fast you lift,” Schoenfeld says. That range is one to three seconds on both parts of the repetition – concentric (lifting the weight) and eccentric (lowering it). That’s probably how most of us lift anyway.

The data show there’s no advantage to forcing yourself to train at an unnaturally slow pace, a strategy that comes into fashion from time to time. Schoenfeld says that super-slow lifting reduces muscle activation by about a third.

When the goal is pure strength, he says, what matters is “an intent to lift the weight as fast as possible,” no matter how fast it actually moves. In one study he cites, the first rep of a maximum-effort set of bench presses took 1.2 seconds, while the fifth and final rep took 3.3 seconds.

We could stop there and say the question is answered. But if we did we’d leave out a potentially more important aspect of lifting speed: what you focus on while you lift.

In one of his first published studies, Schoenfeld showed that strength training builds muscle with three primary mechanisms: mechanical tension (how hard the muscles strain to move the weight), muscle damage, and metabolic stress.

Most of the time, we manipulate those variables by increasing the load (lifting more), or by increasing the volume (doing more). But both of those tactics have obvious limits imposed by our genes and our schedules.

When your goal is to build muscle, slowing down your tempo can help increase the tension on the specific muscles you’re targeting.

But if you slow it down too far, you have to reduce the weight so much that you limit mechanical tension. It will feel like you’re working harder, but your muscles may not be working hard enough to simulate growth.

The best lifting speed, most of the time, is one that allows you to focus on the muscles you’re trying to build, Schoenfeld says, and thus establish a mind-muscle connection.

Here’s how Schoenfeld and coauthor Bret Contreras  described it in a recent review in Strength and Conditioning Journal: “This internally focused strategy involves visualising the target muscle and consciously directing neural drive to the muscle during exercise performance.”

Researchers have found that you can create higher muscle activation with focused attention on those muscles, and that higher activation is linked to better muscle growth, although no study so far has drawn a direct line from one to the other. It just makes sense that it would work that way.

But only to a point. With heavier weights on multijoint exercises like the three powerlifts – squat, deadlift, bench press – the last thing you want to do is focus internally.

“Your focus has to be on lifting the weight, not on what muscles will be active,” Schoenfeld says. Thinking about your pecs during a bench press is a pretty good way to limit your strength and mess up your form.

Related: The 5 Worst Things To Do After A Workout

So that’s the answer to the rep-speed question. When the goal is to increase muscle size, slow down just enough to focus internally on the muscles you’re targeting. When the goal is strength and power, focus externally on completing the lift as fast as possible without compromising your form.

And if some quick-talking huckster tries to convince you otherwise, you’re best advised to walk away. Fast. Because that burns more calories.

The article Does it Matter How Fast You Lift? was originally published on MensHealth.com

50% Of Guys Couldn’t Find the Vagina On This Diagram

50% Of Guys Couldn’t Find the Vagina On This Diagram

This Is What Women Really Want From Sex, According To New Research

This Is What Women Really Want From Sex, According To New Research

This Is How Long Sex Actually Lasts For Most Couples

This Is How Long Sex Actually Lasts For Most Couples