The actor showed off his "bulletproof" physique in a new gym photo on Instagram. 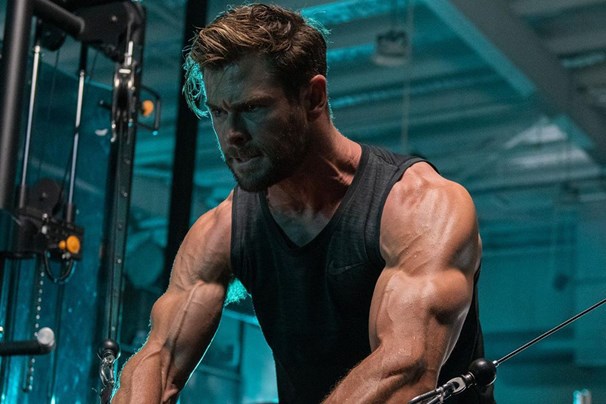 Chris Hemsworth has been packing on more muscle than ever over the last year in preparation for the Hulk Hogan biopic and fourth Thor movie, to the point that it actually became kind of an issue for his stunt double, who struggled to keep up with his gains. And now the Australian actor has just shared a look at his incredibly jacked biceps and triceps as he prepares to film a sequel to the action movie Extraction.

In an Instagram photo taken six weeks out from the beginning of shooting, Hemsworth revealed the “bulletproof rig” he’s been building with the help of his Centr app’s team of trainers and nutrition coaches, and said that he feels “good and ready” to commence the physically demanding, stunt-filled process.

The first Extraction movie included several jaw-dropping action sequences, including a scene where Hemsworth’s character Tyler Rake dives off a cliff (for which the actor held his breath underwater for three whole minutes), but its standout moment was “The Oner,” a 12-minute fight scene that director Sam Hargraves captured in a single take, and which took a real toll on the actors.

“Part of the benefit of doing a longer, extended action sequence is that your performers aren’t just doing it for four or five minutes before you cut and they get to rest,” Hargraves said. “By the time you get to the end, there’s not a lot of acting required—the performers are really tired.”

At this point, Hemsworth is a pro when it comes to pushing through fatigue. In a recent Instagram video, he shared his personal mantra for getting motivated and forcing himself to grind through his workouts even when he doesn’t want to: “If you’re feeling flat, just get moving. Movement creates motivation.”

This article was originally published on menshealth.com.