This mentor has guided two all-time greats of CrossFit. His client for today: you. The advice Shane Orr’s mum gave him – to treat others as you’d like to be treated – well, he applied that adroitly to coaching Tia Claire Toomey and Mat Fraser.

Let’s say they were practising the clean and jerk, and Orr noticed that Tia wasn’t utilising the fullest-possible extension of her hips, knees and ankles in the clean phase. Instead of saying, “Babe, your extension sucks”, Orr would turn to Fraser and say, “Hey, I love your extension! You’re doing a phenomenal job on that”.

The result, says Orr, is that the non-complimented athlete thinks, Hell, I want that recognition – I’m going to do that! “You boost one athlete, while subtly giving a pointer to the other.”

Like Tia, Orr can’t stand still. He tells me they’re about to go into camp with the Australian women’s bobsled team before next February’s Winter Olympics in Beijing. “I’m assisting the coach and Tia is competing,” he says. “We’re finding ways to stimulate us to keep going.”

In 2007, Orr was intrigued by a workout he saw in Men’s Health that combined a bunch of disparate moves. It was the famous 300 Workout, which he loves to this day. Are you fit? Try it. The goal is to notch your 300 reps as quickly as possible. 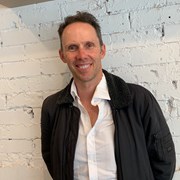 Dan Williams, Men’s Health’s Associate Editor, is the magazine’s most experienced presence. While his body protests more than it used to, he still insists it honour the MH way, with regular dawn workouts mingled with punishing sessions on the tennis court – all against a backdrop of abstemiousness: he turns into a pumpkin at 10pm.