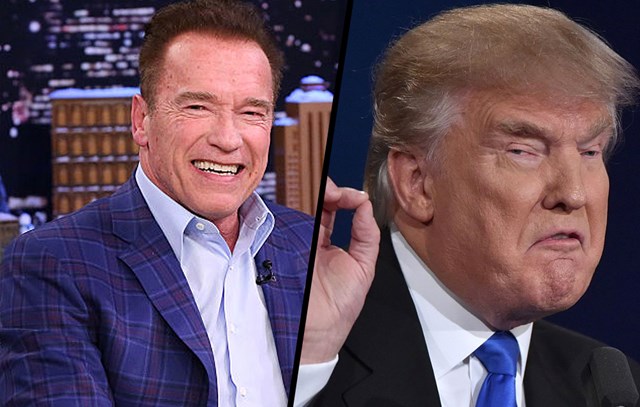 Arnie for President? That’s definitely something we can get behind. And this morning, the great man himself made a formal offer to take over as US president.

Schwarzenegger’s comments came after Trump, former host of Celebrity Apprentice, hit out at the Terminator Actor, mocking him for the show’s decline in ratings since he departed and Arnie took over.

Trump went as far as urging people to “pray for Arnold” and labeled the new series of Celebrity Apprentice a “total disaster” during the National Prayer Breakfast in Washington D.C.

Trump said: “We had tremendous success on ‘The Apprentice’, and when I ran for president, I had to leave the show… and they hired a big, big movie star, Arnold Schwarzenegger, to take my place, and we know how that turned out.”

“The ratings went right down the tubes. It’s been a total disaster, and [executive producer] Mark [Burnett] will never, ever bet against Trump again. And I want to just pray for Arnold, if we can, for those ratings, OK?”

In response, the 69-year-old actor suggested he and the president switch jobs.

“Hey Donald, I have a great idea: Why don’t we switch jobs? You take over TV because you’re such an expert at ratings, and I take over your job, and then people can finally sleep comfortably again.”

Schwarzenegger – who was Governor of California for eight years, stepping down in 2011 – has previously admitted he wanted to campaign to be the Republican candidate for presidency this year, except for one little problem: only natural-born citizens – born either in the United States or on foreign soil from at least one US citizen parent – can run for president.

The Austrian actor said: “If I’d been born in America, I would’ve run. Because now? This was a very good time to get in the race.”

With Sport Suspended, Here’s How Athletes Are Passing Time In Isolation

With Sport Suspended, Here’s How Athletes Are Passing Time In Isolation

How Many Eggs Is It Safe to Eat Per Week?

How Many Eggs Is It Safe to Eat Per Week?

Is It Still Safe To Go To The Supermarket?

Is It Still Safe To Go To The Supermarket?

Are You Suffering From Allergies Or COVID-19? Here’s How To Tell

Are You Suffering From Allergies Or COVID-19? Here’s How To Tell