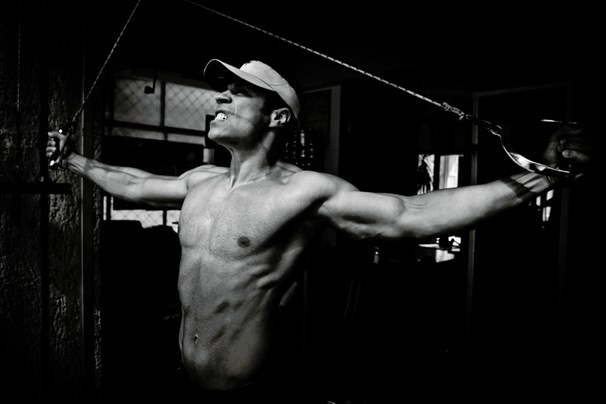 Leg day might arrive on the training schedule only to be met with a groan, but when it comes to training our arms, we can’t get to the gym quick enough. Wearing a stringlet (naturally) and occupying adequate floor space with the best lighting in front of the floor-length mirror, it’s all we can do but not stare at our biceps and lats with each press, curl and pull, practically willing the muscles into existence with a stare. Safe to say, the arms are a body part most of us tend to gravitate towards first when it comes to building muscle and the satisfaction that comes with seeing gains is unparalleled. But when it comes to building muscle sustainability and progressively while staying injury free, it helps to get advice from the experts. And when it comes to the shoulders, that’s one muscle group that tends to be overworked with exercises that often neglect proper form.

Thankfully, strength coach and Athlean-X founder Jeff Cavaliere C.S.C.S is here to share his tips. If you’re not familiar with Cavaliere, his philosophy when it comes to strength training is one grounded in individuality, as he looks to each individual to ensure they are performing the right exercises with the most efficient form. Many of Cavaliere’s videos offer an insight into the basics of strength training that can be applied to beginners right through to the seasoned professional and bodybuilder.

Now, Cavaliere’s turned his attention to the shoulders as he shares his personal ranking of exercises for the front, middle and rear delts. Taking his viewers through the various exercises, Cavaliere breaks down the best exercises you can do to build muscle in the area, as well as those exercises that are either ineffective or risk harm. Ultimately, his go-to exercises for building the shoulders with limited time available in the gym are presses. While he didn’t divulge just which pressing movements exactly, he recommends using movements like barbell and dumbbell overhead presses, the Z-press and modified Bradford press, as well as the handstand pushup, to effectively target the muscle groups. See the exercises Cavaliere urges you to include in your next workout and those he stresses to ditch, below.

“Every single rep of an upright row places your shoulder into an internally rotated position with elevation,” explains Cavaliere, who compares the move to the kind of test a doctor might do while checking for shoulder impingement. Not surprisingly, he says this is an exercise that will give you grief over time as “the biomechanics of the exercise itself are literally fighting your own body’s anatomy.”

Much like the upright row, this move puts you in opposition to the natural movement patterns of your body. “There is nothing wrong with an overhead press,” says Cavaliere. “But when you do it from this position, you’re placing yourself at unnecessary injury risk.”

While he admits he is normally a fan of this move, Cavaliere says that when performed from an elevated arm, it can do harm to the muscles. “You can get the same benefit and activation to the middle delt by simply leaning forward a little bit and keeping your thumb higher than your pinkie to ensure you have external rotation at the shoulder,” he explains.

While it targets the front delt, lack of range of motion for this exercise makes it extremely limiting. As Cavaliere explains, “We’re not taking the weight from our thighs all the way up in an arc to end in this position, we’re kind of shortcutting it by starting at our chest.”

While this move introduces a level of eccentric overload stress which is a good driver of hypertrophy, it also includes a degree of momentum and muscle substitution which takes away from the specific area you’re trying to engage.

Although not a bad exercise per say, the limited range of motion means gains in the rear delts are also limited. “It’s not just about abducting the arm away from you as if you’re doing a side lateral raise bent over, it really is about getting that arm back behind the body, and if you use even just a little bit more weight than you can handle here, the range of motion is going to be limited even more,” says Cavaliere.

As well as working multiple heads of the shoulder, this exercise also corrects the dangerous positioning of the behind-the-neck press by placing the arms out in front of the body. When doing this, you should be mindful of over-rotating into internal rotation.

Targeting the middle delt, this exercise allows you to use heavier weights as you use a rowing movement to give yourself the opportunity for more of a muscle contraction. “Think of it like 20 per cent row, 80 per cent abduction – and when you do, you’re going to have 100 per cent of a good exercise option when it comes to creating middle delt growth,” says Cavaliere.

Cavaliere notes that face pulls are one of his favourite exercises. While they are great though, he admits that there are other movements better for targeting the rear delts. This is largely because other muscles get involved in the action, including the upper back, mid-scap, and rotator cuffs. Still, it’s a great exercise to finish off a workout.

The scoop press offers increased range of motion and more focus on the front delt. The key thing to remember here is to keep your elbows locked in position when you perform the exercise to ensure you don’t turn it into a biceps movement.

Cavaliere prefers this exercise performed with the thumb up in order to target the middle delt. Lean forward, and then perform your reps at a slow, controlled tempo.

An excellent exercise for targeting the rear delts, Cavaliere explains: “You should look like you’re trying to pick up a pair of pants that kind of dropped down too low.” He also notes that when performing the exercise, you should keep your arms behind your body.

This exercise targets front delts with dumbbells and Cavaliere describes it as the “best of the best when it comes to the front delts.”

Cavaliere considers this the best exercise for targeting the rear delt as it gives you the best of two exercises: the reverse fly and hip hugger. You’ll get abduction of the shoulder and extension, which allows for an intense contraction. He stresses that you should use a lighter weight that you can handle when performing this exercise.